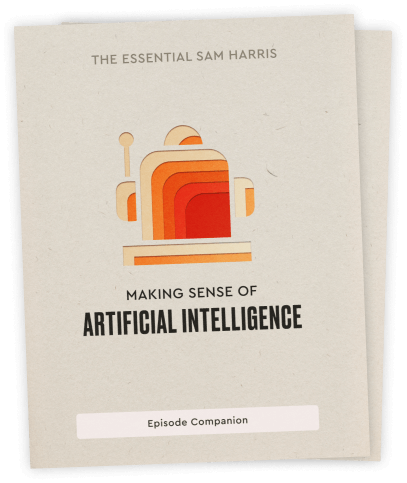 Each episode includes a workbook with illustrations, background information on each guest, references, suggested books and films, and more.

Filmmaker Jay Shapiro has produced a new series of audio documentaries, exploring the major topics that Sam has focused on over the course of his career.

Each episode weaves together original analysis, critical perspective, and novel thought experiments with some of the most compelling exchanges from the Making Sense archive. Whether you are new to a particular topic, or think you have your mind made up about it, we think you’ll find this series fascinating.

And make sure to stick around for the end of each episode, where we provide our list of recommendations from the worlds of film, television, literature, music, and art.

We’ll then be introduced to philosopher Nick Bostrom’s “Genies, Sovereigns, Oracles, and Tools,” as physicist Max Tegmark outlines just how careful we need to be as we travel down the AI path. Computer scientist Stuart Russell will then dig deeper into the value-alignment problem and explain its importance.

We’ll hear from former Google CEO Eric Schmidt about the geopolitical realities of AI terrorism and weaponization. We’ll then touch the topic of consciousness as Sam and psychologist Paul Bloom turn the conversation to the ethical and psychological complexities of living alongside humanlike AI. Psychologist Alison Gopnik then reframes the general concept of intelligence to help us wonder if the kinds of systems we’re building using “Deep Learning” are really marching us towards our super-intelligent overlords.

Finally, physicist David Deutsch will argue that many value-alignment fears about AI are based on a fundamental misunderstanding about how knowledge actually grows in this universe.