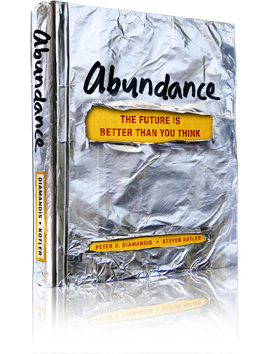 Peter H. Diamandis is the founder and CEO of the X PRIZE Foundation and Co-founder and Chairman of Singularity University.  He is a serial entrepreneur turned philanthropist who has started more than a dozen high-tech companies. He has degrees in molecular biology and aerospace engineering from MIT, and an M.D. from Harvard Medical School. He has written a new book, Abundance: The Future is Better Than You Think, along with author and journalist Steven Kotler, whose articles have appeared in over 60 publications: including the New York Times Magazine, Wired, Discover, Popular Science, Outside, GQ, and National Geographic.

The book has received much advanced praise. Ray Kurzweil, inventor, futurist and author of The Singularity is Near, had this to say:  “This brilliant must-read book provides the key to the coming era of abundance replacing eons of scarcity. Abundance is a powerful antidote to today’s malaise and pessimism.”

Peter and Steven were kind enough to answer my questions by email:

Is the world really getting better?

If you pull back a little bit from the sea of bad news that’s assaulting us these days, what you actually see is a preponderance of trends that are moving in a fantastic direction. Take healthcare: Over the past century, child mortality rates have dropped by 90 percent, while the length of human lifespan has doubled. Or poverty, which has dropped more in the past 50 years than it has in the previous 500.

At a global level, the gap between wealthy nations and poorer nations continues to close. Across the board, we are living longer, wealthier, healthier lives. Certainly, there are still millions of people living in dire, back-breaking poverty, but using almost every quality-of-life metric available—access to goods and services, access to transportation, access to information, access to education, access to life-saving medicines and procedures, means of communication, value of human rights, importance of democratic institutions, durable shelter, available calories, available employment, affordable energy, even affordable beer—our day-to-day experience has improved massively over the past two centuries.

Why aren’t we more aware of these positive trends?

The simple answer is because we’re hard-wired not to notice. As the first order of business for any organism is survival, our brain privileges information that appears to threaten us. As a result, we tend to focus too much on the bad news even as the good news struggles to get through. The media is so saturated with bad news – if it bleeds, it leads – because they’re vying for the amygdala’s attention.

Furthermore, to handle the massive influx of information we process on a moment by moment basis, the brain relies on heuristics. Most of the time these work. Sometimes they fail. When they fail we call them cognitive biases. As it turns out, a lot of our cognitive biases keep us pessimistic as well. The negativity bias is a tendency to give more weight to negative information and experiences than positive ones. Confirmation bias is our tendency to search for or interpret information in ways that confirms our preconceptions—which might not be so bad on its own, but when you add the media’s focus on negative news, you have a recipe for psychological disaster. This list goes on. The result is a brain that believes the end is near and there’s not a damn thing we can do about it.

What do you mean by “abundance”?

We believe that over the next two to three decades it will be possible to significantly raise global standards of living. Abundance is not about providing everyone on this planet with a life of luxury—rather it’s about providing everyone with a life of possibility. To be able to live such a life requires having the basics covered and then some. It also means stanching some fairly ridiculous bleeding: feeding the hungry, providing access to clean water, ending indoor air pollution, and wiping out malaria—four entirely preventable conditions that kill, respectively, seven, three, three, and two people per minute world-wide. But ultimately, abundance is about creating a world of possibility: a world where everyone’s days are spent dreaming and doing, not scrapping and scraping.

What makes you think that this is possible?

The data for starters. We combed through decades of research, reams of hard facts, and interviewed dozens of scientists, innovators, engineers, and philanthropists. We also see four emerging forces that now beginning to really make their presence felt in the world, but together should enable us to make the equivalent of 200 years of progress over the next 20 years.

What are these forces?

Exponential Technologies: Over the past few decades, researchers have come to conclude that any information-based technology is advancing along exponential growth curves. This is why the cell phone in your pocket is as powerful as a mid-70s era supercomputer for a minute fraction of the cost. Besides communication technology, exponential forces are at work in computational and network systems, artificial intelligence, robotics, biotechnology, bio-informatics, nanotechnology, human-machine interfaces, and many more.  These technologies will soon enable the vast majority of human beings to experience what only the affluent have had access to thus far. In Abundance, we examine how exponential technologies are being used (and can be used) to provide 7 billion people with clean water, nutritious food, affordable housing, personalized education, top-tier medical care, non-polluting and ubiquitous energy.

DIY Innovators: DIY innovators are individuals and small groups empowered by exponential technologies and driven by the desire to take on humanity’s grand challenges. As we explore in the book, these groups now have the ability to tackle problems that were once the sole domain of governments and major corporations and NGOs. As a result, we are at the front end of a DIY revolution unlike anything the world has yet seen.

Technophilanthropists: Today there are more than 1,400 billionaires and 93,000 “ultra-high-net-worth” individuals in the world. Many of these are young, very socially-conscious entrepreneurs who made their money in technology and are now interested in using it to slay some of the world’s grandest challenges. Bill Gates fighting against malaria, Jeff Skoll crusading against pandemics, Pierre Omyidar democracy-spreading efforts. There are many, many more. We call these individuals Technophilanthropists.

Rising Billion: These are the poorest people on Earth, the so-called “bottom billion.” We have renamed this group the “Rising Billion” because, thanks to the exponential spread of communication and information technologies (like the smart phone), these people are coming on line for the very first time. Their voices, which have never before been heard, are suddenly joining the global conversation. Aided by these technologies, the Rising Billion are beginning to pull themselves out of poverty. They are already on their way to becoming a powerful and significant consuming segment of humanity, and many companies are rushing to develop ultra-low cost products to meet their needs. This effort will drive down the price of basic goods and services in a fashion that will benefit everyone. But the Rising Billion have also become a producing and consuming segment of humanity, generating new ideas, insights, products and services that add to the overall wealth of Earth.

It seems to me that all of this can sound a little quixotic and out of touch with some of the challenges that humanity now faces. Can you give me a concrete example of a trend toward abundance that is unlikely to ever be reversed?

Over the past twenty years wireless technologies and the Internet have become ubiquitous, affordable and available to almost everyone. Africa has skipped a technological generation, by-passing the landlines that stripe our Western skies for the wireless way. Today, a Masai warrior with a cellphone has better telecom capabilities than the President of the United States did 25 years ago. If he’s a Masai warrior on a smart phone with access to Google, then he has access to more information than the President did just 15 years ago. By the end of 2013, over 70 percent of humanity will have access to instantaneous, low-cost, communications and information. In other words, we are now living in a world of information and communication abundance.

And to your exact point—poverty has been reduced more in the past 50 years than in the previous 500. One major reason is the abundance of information-and-communication technology. According to research done at the London School of Business, adding ten cell phones per hundred people raises GDP by .6 percent. To quote technology write Nicholas Sullivan on this matter: “extrapolating from UN figures on poverty reduction (1 percent GDP growth results in a 2 percent poverty reduction), that.0.6 percent growth would cut poverty by roughly 1.2 percent. Given 4 billion people in poverty, that means with every 10 new phones per 100 people, 48 million people graduate from poverty.”

So do you believe that the future is guaranteed to be better than most people think?

We are not so naïve as to think that there won’t be bumps along the way. Some of those will be big bumps: economic melt-downs, natural disasters, terrorist attacks. During these times, the concept of abundance will seem far-off, alien, even nonsensical, but if history is our guide then progress continues through the good times and the bad.

So while there are likely to be plenty of rude, heartbreaking interruptions between here and there, we do feel that with the proper application of resources and capital, global living standards can continue to improve regardless of the horrors that dominate the headlines.

What do you hope people will get from reading your book?

The first is hope. You can’t change the world if you don’t believe it’s changeable.

The second is a vision and road map: a way to take bigger risks, create an innovation culture, and focus on solving problems rather than complaining about them.

Most importantly, we want people to understand that, more than ever before in history, individuals can now band together to solve grand challenges. We don’t believe abundance happens automatically. It’s up to each of us. That’s what makes today so different. We face enormous problems, but we—as individuals— have enormous power to solve them. It really is a magical time.