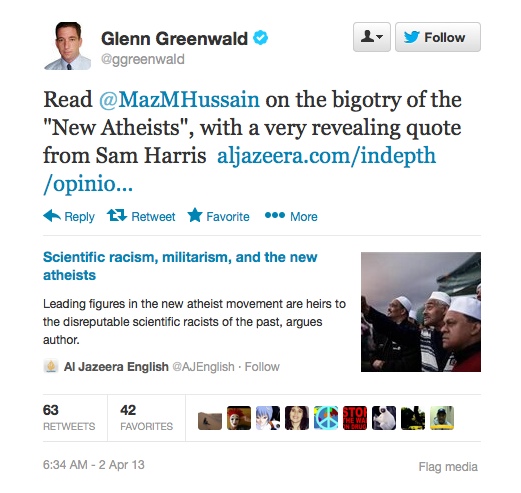 I’m up against a book deadline and have had to step away from blogging for a few months. One of the benefits of this time, as well as one of its frustrations, is that I’ve had to ignore the usual ephemera that might have otherwise captured my attention. For instance, in recent days both Salon and Al Jazeera published outrageous attacks on me and my fellow “new atheists.” The charges? Racism and “Islamophobia” (again). Many readers have written to ask when I will set the record straight. In fact, I consider both articles unworthy of a response, and I was quite happy to have a reason to ignore them. But then I noticed that the columnist Glenn Greenwald had broadcast an approving Tweet about the Al Jazeera piece to his fans (above).

I’ve had pleasant exchanges with Greenwald in the past, so I wrote to him privately to express my concern. As you will see, I came right to the point. I was simply outraged that he would amplify this pernicious charge of racism so thoughtlessly. However, I am even more appalled by his response. The man actually has thought about it. And thinking hasn’t helped.

Here is our unedited exchange:

Before you retweet defamatory garbage about me to 125,000 people, it would nice if you looked at the article from which that joker had mined that “very revealing quote.” The whole point of my original article, written in 2006, was to bemoan the loss of liberal moral clarity in the war on terror—and to worry about the influence of the Christian conservatives in the U.S. and fascists in Europe.

Here is the very revealing quote in context:

Increasingly, Americans will come to believe that the only people hard-headed enough to fight the religious lunatics of the Muslim world are the religious lunatics of the West. Indeed, it is telling that the people who speak with the greatest moral clarity about the current wars in the Middle East are members of the Christian right, whose infatuation with biblical prophecy is nearly as troubling as the ideology of our enemies. Religious dogmatism is now playing both sides of the board in a very dangerous game.

While liberals should be the ones pointing the way beyond this Iron Age madness, they are rendering themselves increasingly irrelevant. Being generally reasonable and tolerant of diversity, liberals should be especially sensitive to the dangers of religious literalism. But they aren’t.

The same failure of liberalism is evident in Western Europe, where the dogma of multiculturalism has left a secular Europe very slow to address the looming problem of religious extremism among its immigrants. The people who speak most sensibly about the threat that Islam poses to Europe are actually fascists.
To say that this does not bode well for liberalism is an understatement: It does not bode well for the future of civilization.

To be honest, I really don’t see how that full quote changes anything. You are indeed saying – for whatever reasons – that the fascists are the ones speaknig most sensibly about Islam, which is all that column claimed.

I know Murtaza’s writings really well and he’s always trustworthy and diligent, and I think he was here, too.

I’m not sure how you can blame me for tweeting an article published in Al Jazeera and written by a respectable commentator, but I’m happy to post your email to me – or some edited version of it as you wish – and tweet that, too.

You have got to be kidding…

A few points that it would be nice to get into your brain:

1. There is absolutely nothing racist about my criticism of Islam. I criticize white, western converts in precisely the same terms—in fact, I am even more critical of them, because they weren’t brainwashed into the faith from birth. And one of my main concerns—always ignored by “trustworthy and diligent” people like Murtaza—is for all the suffering of women, homosexuals, freethinkers, and intellectuals in indigenous Muslim societies. One of my friends (and heroes) is Ayaan Hirsi Ali—whom I’m constantly having to defend from similarly tendentious attacks from my fellow liberals. How you get “racism” out of these convictions, I’ll never know. (But you know how Murtaza would summarize this point: “Harris says, ‘Some of my best friends are black’!”) The truth is that the liberal (multicultural) position on Islam is racist. If a predominantly white community behaved this way—the Left would effortlessly perceive the depth of the problem. Imagine Mormons regularly practicing honor killing or burning embassies over cartoons…

2. I wasn’t making common cause with fascists—I was referring to the terrifying fact (again, back in 2006), that when you heard someone making sense on the subject of radical Islam in Europe—e.g. simply admitting that it really is a problem—a little digging often revealed that they had some very unsavory connections to Anti-Semitic, anti-immigrant, neo-Nazi, etc. hate groups. The point of my article was to worry that the defense of civil society was being outsourced to extremists.

3. If you can’t see that Murtaza’s article is an unscrupulous exercise in quote-mining, you’re not paying attention. How can I blame you for retweeting it? The article is defamatory—indeed, it is beneath responding to—and it was destined to be buried in noise until you retweeted it. You endorsed it and amplified its effects—hence my annoyance. What part of that process don’t you understand?

You can sneer and hurl insults all you want, but I’ve long believed that the crowd of which you’re a part has been flirting with, and at times embracing, Islamophobia. I’m sure you saw the Salon article by Nathan Lean from a couple days ago, which I believe I also tweeted, that made the same point (http://www.salon.com/2013/03/30/dawkins_harris_hitchens_new_atheists_flirt_with_islamophobia/).

I understand “the process” perfectly fine. I think you’re embarrassed that people are now paying attention to some of the darker and uglier sentiments that have been creeping into this form of athesim advocacy, and are lashing out at anyone helping to shine a light on that. A bizarre and wholly irrational fixation on Islam, as opposed to the evils done by other religions, has been masquerdaing in the dark under the banner of rational atheism for way too long.

The fact that you intended to convey a more-in-sorrow-than-anger tone when praising fascists for their uniquely “sensible” view of Islam doesn’t change the fact that you did say exactly what Murtaza said you said.

My offer to publish our whole email exchange and then tweet it still stands so that anyone is able to decide for themselves. Let me know if you’d like me to do that.

Yes, I saw the Lean piece—also absurdly unfair. The idea that “new atheism” is a cover for a racist hatred of Muslims is ridiculous (and, again, crudely defamatory). I have written an entire book attacking Christianity. And do you know what happens when I or any of my “new atheist” colleagues criticize Christians for their irrational beliefs? They say, “Of course, you feel free to attack us, but you would never have the courage to criticize Islam.” As you can see, our Christian critics follow our work about as well as you do.

Needless to say, there are people who hate Arabs, Somalis, and other immigrants from predominantly Muslim societies for racist reasons. But if you can’t distinguish that sort of blind bigotry from a hatred and concern for dangerous, divisive, and irrational ideas—like a belief in martyrdom, or a notion of male “honor” that entails the virtual enslavement of women and girls—you are doing real harm to our public conversation. Everything I have ever said about Islam refers to the content and consequences of its doctrine. And, again, I have always emphasized that its primary victims are innocent Muslims—especially women and girls.

There is no such thing as “Islamophobia.” This is a term of propaganda designed to protect Islam from the forces of secularism by conflating all criticism of it with racism and xenophobia. And it is doing its job, because people like you have been taken in by it.

Did you happen to see The Book of Mormon? Do you know how the Mormons protested this attack upon their faith? They placed ads for Mormonism in the Playbill. Imagine staging a similar production about Islam: Would it be “bizarre and wholly irrational” for Trey Parker and Matt Stone to worry that the Muslim community might have a different response?

Your treatment of these issues, and of me in this email exchange, has been remarkably disingenuous. If I had endorsed a similarly libelous attack on you and broadcast it to all my readers, you would also be annoyed. Just imagine how you would view me if I then defended my actions in the way that you have here, claiming that you are just “embarrassed” to have been found out to be the racist that you are.

Yes, I think we should publish this. It might be useful for our readers to see how difficult it is to have an honest conversation about these things, even in private.