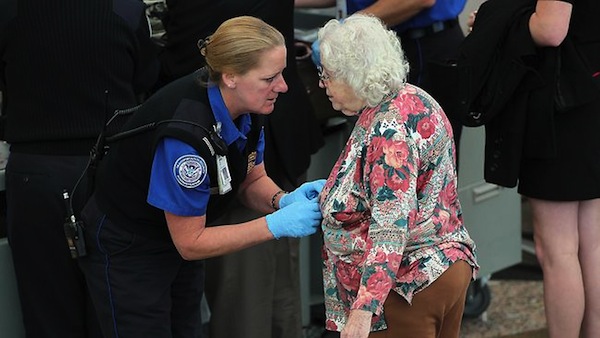 Much has been written about how insulting and depressing it is, more than a decade after the events of 9/11, to be met by “security theater” at our nation’s airports. The current system appears so inane that one hopes it really is a sham, concealing more-ingenious intrusions into our privacy. The spirit of political correctness hangs over the whole enterprise like the Angel of Death—indeed, more closely than death, or than the actual fear of terrorism. And political correctness requires that TSA employees direct the spotlight of their attention at random—or appear to do so—while making rote use of irrational procedures and dubious technology.

Although I don’t think I look like a jihadi, or like a man pretending not to be one, I do not mean to suggest that a person like me should be exempt from scrutiny. But other travelers fit the profile far less than I do. One glance at these innocents reveals that they are no more likely to be terrorists than walruses in disguise. I make it a point to notice such people while queuing for security at the airport, just to see what sort of treatment they receive at the hands of the TSA.

While leaving JFK last week, I found myself standing in line behind an elderly couple who couldn’t have been less threatening had they been already dead and boarding in their coffins. I would have bet my life that they were not waging jihad. Both appeared to be in their mid-eighties and infirm. The woman rode in a wheelchair attended by an airport employee as her husband struggled to comply with TSA regulations—removing various items from their luggage, arranging them in separate bins, and loading the bins and bags onto the conveyor belt bound for x-ray.

After much preparation, the couple proceeded toward the body scanner, only to encounter resistance. It seems that they had neglected to take off their shoes. A pair of TSA screeners stepped forward to prevent this dangerous breach of security—removing what appeared to be orthopedic footwear from both the woman in the wheelchair and the man now staggering at her side. This imposed obvious stress on two harmless and bewildered people and caused considerable delay for everyone in my line. I turned to see if anyone else was amazed by such a perversion of vigilance. The man behind me, who could have played the villain in a Bollywood film, looked unconcerned.

I have noticed such incongruities before. In fact, my wife and I once accidentally used a bag for carry-on in which I had once stored a handgun—and passed through three airport checkpoints with nearly 75 rounds of 9 mm ammunition. While we were inadvertently smuggling bullets, one TSA screener had the presence of mind to escort a terrified three-year-old away from her parents so that he could remove her sandals (sandals!). Presumably, a scanner that had just missed 2.5 pounds of ammunition would determine whether these objects were the most clever bombs ever wrought. Needless to say, a glance at the girl’s family was all one needed to know that they hadn’t rigged her to explode. (The infuriating scene played out very much like this one.)

Is there nothing we can do to stop this tyranny of fairness? Some semblance of fairness makes sense—and, needless to say, everyone’s bags should be screened, if only because it is possible to put a bomb in someone else’s luggage. But the TSA has a finite amount of attention: Every moment spent frisking the Mormon Tabernacle Choir subtracts from the scrutiny paid to more likely threats. Who could fail to understand this?

Imagine how fatuous it would be to fight a war against the IRA and yet refuse to profile the Irish? And yet this is how we seem to be fighting our war against Islamic terrorism.

Granted, I haven’t had to endure the experience of being continually profiled. No doubt it would be frustrating. But if someone who looked vaguely like Ben Stiller were wanted for crimes against humanity, I would understand if I turned a few heads at the airport. However, if I were forced to wait in line behind a sham search of everyone else, I would surely resent this additional theft of my time.

We should profile Muslims, or anyone who looks like he or she could conceivably be Muslim, and we should be honest about it. And, again, I wouldn’t put someone who looks like me entirely outside the bull’s-eye (after all, what would Adam Gadahn look like if he cleaned himself up?) But there are people who do not stand a chance of being jihadists, and TSA screeners can know this at a glance.

Needless to say, a devout Muslim should be free to show up at the airport dressed like Osama bin Laden, and his wives should be free to wear burqas. But if their goal is simply to travel safely and efficiently, wouldn’t they, too, want a system that notices people like themselves? At a minimum, wouldn’t they want a system that anti-profiles—applying the minimum of attention to people who obviously pose no threat?

Watch some of the TSA screening videos on YouTube—like this one—and then imagine how this infernal stupidity will appear if we ever suffer another terrorist incident involving an airplane.

Many readers found this blog post stunning for its lack of sensitivity. The article has been called “racist,” “dreadful,” “sickening,” “appalling,” “frighteningly ignorant,” etc. by (former) fans who profess to have loved everything I’ve written until this moment. I find this reaction difficult to understand. Of course, anyone who imagines that there is no link between Islam and suicidal terrorism might object to what I’ve written here, but I say far more offensive things about Islam in The End of Faith and in many of my essays and lectures.

In any case, it is simply a fact that, in the year 2012, suicidal terrorism is overwhelmingly a Muslim phenomenon. If you grant this, it follows that applying equal scrutiny to Mennonites would be a dangerous waste of time.

I suspect that it will surprise neither my fans nor my critics that I view the furor over this article to be symptomatic of the very political correctness that I decry in it. However, it seems that when one speaks candidly about the problem of Islam misunderstandings easily multiply. So I’d like to clarify a couple of points here:

1. When I speak of profiling “Muslims, or anyone who looks like he or she could conceivably be Muslim,” I am not narrowly focused on people with dark skin. In fact, I included myself in the description of the type of person I think should be profiled (twice). To say that ethnicity, gender, age, nationality, dress, traveling companions, behavior in the terminal, and other outward appearances offer no indication of a person’s beliefs or terrorist potential is either quite crazy or totally dishonest. It is the charm of political correctness that it blends these sins against reasonableness so seamlessly. We are paying a very high price for this obscurantism—and the price could grow much higher in an instant. We have limited resources, and every moment spent searching a woman like the one pictured above, or the children seen in the linked videos, is a moment in which someone or something else goes unobserved.

2. There is no conflict between what I have written here and “behavioral profiling” or other forms of threat detection. And if we can catch terrorists before they reach the airport, I am all for it. But the methods we use to do this tend to be even more focused and invasive (and, therefore, offensive) than profiling done by the TSA. Many readers who were horrified by my article seem to believe that there is nothing wrong with “gathering intelligence.” One wonders just how they think that is done.

There may be interesting arguments against profiling (or anti-profiling of the sort I recommend here), but I haven’t noticed any amid the torrents of criticism I’ve received thus far. If there is an expert on airline security who wants to set me straight, I am happy to offer this page as a forum.

On Knowing Your Enemy

The Trouble with Profiling