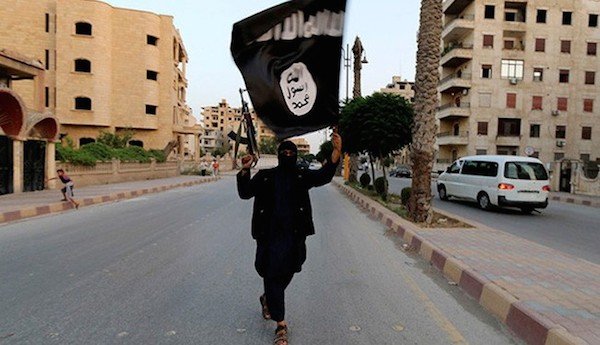 As an atheist, I cannot help wondering when the scrim of pretense and delusion will be finally burned away—either by the clear light of reason or by a surfeit of horror meted out to innocents by the parties of God.

In his speech responding to the horrific murder of journalist James Foley by a British jihadist, President Obama delivered the following rebuke (using an alternate name for ISIS):

ISIL speaks for no religion… and no faith teaches people to massacre innocents. No just God would stand for what they did yesterday and what they do every single day. ISIL has no ideology of any value to human beings. Their ideology is bankrupt…. we will do everything that we can to protect our people and the timeless values that we stand for. May God bless and keep Jim’s memory. And may God bless the United States of America.

In his subsequent remarks outlining a strategy to defeat ISIS, the President declared:

Now let’s make two things clear: ISIL is not Islamic. No religion condones the killing of innocents, and the vast majority of ISIL’s victims have been Muslim…. ISIL is a terrorist organization, pure and simple. And it has no vision other than the slaughter of all who stand in its way…. May God bless our troops, and may God bless the United States of America.

As an atheist, I cannot help wondering when this scrim of pretense and delusion will be finally burned away—either by the clear light of reason or by a surfeit of horror meted out to innocents by the parties of God. Which will come first, flying cars and vacations to Mars, or a simple acknowledgment that beliefs guide behavior and that certain religious ideas—jihad, martyrdom, blasphemy, apostasy—reliably lead to oppression and murder? It may be true that no faith teaches people to massacre innocents exactly—but innocence, as the President surely knows, is in the eye of the beholder. Are apostates “innocent”? Blasphemers? Polytheists? Islam has the answer, and the answer is “no.”

More British Muslims have joined the ranks of ISIS than have volunteered to serve in the British armed forces. In fact, this group has managed to attract thousands of recruits from free societies throughout the world to help build a paradise of repression and sectarian slaughter in Syria and Iraq. This is an astonishing phenomenon, and it reveals some very uncomfortable truths about the failures of multiculturalism, the inherent vulnerability of open societies, and the terrifying power of bad ideas.

No doubt many enlightened concerns will come flooding into the reader’s mind at this point. I would not want to create the impression that most Muslims support ISIS, nor would I want to give any shelter or inspiration to the hatred of Muslims as people. In drawing a connection between the doctrine of Islam and jihadist violence, I am talking about ideas and their consequences, not about 1.5 billion nominal Muslims, many of whom do not take their religion very seriously.

But a belief in martyrdom, a hatred of infidels, and a commitment to violent jihad are not fringe phenomena in the Muslim world. These preoccupations are supported by the Koran and numerous hadith. That is why the popular Saudi cleric Mohammad Al-Areefi sounds like the ISIS army chaplain. The man has 9.5 million followers on Twitter (twice as many as Pope Francis has). If you can find an important distinction between the faith he preaches and that which motivates the savagery of ISIS, you should probably consult a neurologist.

Understanding and criticizing the doctrine of Islam—and finding some way to inspire Muslims to reform it—is one of the most important challenges the civilized world now faces. But the task isn’t as simple as discrediting the false doctrines of Muslim “extremists,” because most of their views are not false by the light of scripture. A hatred of infidels is arguably the central message of the Koran. The reality of martyrdom and the sanctity of armed jihad are about as controversial under Islam as the resurrection of Jesus is under Christianity. It is not an accident that millions of Muslims recite the shahadah or make pilgrimage to Mecca. Neither is it an accident that horrific footage of infidels and apostates being decapitated has become a popular form of pornography throughout the Muslim world. Each of these practices, including this ghastly method of murder, find explicit support in scripture.

But there is now a large industry of obfuscation designed to protect Muslims from having to grapple with these truths. Our humanities and social science departments are filled with scholars and pseudo-scholars deemed to be experts in terrorism, religion, Islamic jurisprudence, anthropology, political science, and other diverse fields, who claim that where Muslim intolerance and violence are concerned, nothing is ever what it seems. Above all, these experts claim that one can’t take Islamists and jihadists at their word: Their incessant declarations about God, paradise, martyrdom, and the evils of apostasy are nothing more than a mask concealing their real motivations. What are their real motivations? Insert here the most abject hopes and projections of secular liberalism: How would you feel if Western imperialists and their mapmakers had divided your lands, stolen your oil, and humiliated your proud culture? Devout Muslims merely want what everyone wants—political and economic security, a piece of land to call home, good schools for their children, a little leisure to enjoy the company of friends. Unfortunately, most of my fellow liberals appear to believe this. In fact, to not accept this obscurantism as a deep insight into human nature and immediately avert one’s eyes from the teachings of Islam is considered a form of bigotry.

In any conversation on this topic, one must continually deploy a firewall of caveats and concessions to irrelevancy: Of course, U.S. foreign policy has problems. Yes, we really must get off oil. No, I did not support the war in Iraq. Sure, I’ve read Chomsky. No doubt, the Bible contains equally terrible passages. Yes, I heard about that abortion clinic bombing in 1984. No, I’m sorry to say that Hitler and Stalin were not motivated by atheism. The Tamil Tigers? Of course, I’ve heard of them. Now can we honestly talk about the link between belief and behavior?

Yes, many Muslims happily ignore the apostasy and blasphemy of their neighbors, view women as the moral equals of men, and consider anti-Semitism contemptible. But there are also Muslims who drink alcohol and eat bacon. All of these persuasions run counter to the explicit teachings of Islam to one or another degree. And just like moderates in every other religion, most moderate Muslims become obscurantists when defending their faith from criticism. They rely on modern, secular values—for instance, tolerance of diversity and respect for human rights—as a basis for reinterpreting and ignoring the most despicable parts of their holy books. But they nevertheless demand that we respect the idea of revelation, and this leaves us perpetually vulnerable to more literal readings of scripture.

The idea that any book was inspired by the creator of the universe is poison—intellectually, ethically, and politically. And nowhere is this poison currently doing more harm than in Muslim communities, East and West. Despite all the obvious barbarism in the Old Testament, and the dangerous eschatology of the New, it is relatively easy for Jews and Christians to divorce religion from politics and secular ethics. A single line in Matthew—“Render unto Caesar the things that are Caesar’s, and unto God the things that are God’s”—largely accounts for why the West isn’t still hostage to theocracy. The Koran contains a few lines that could be equally potent—for instance, “There is no compulsion in religion” (2:256)—but these sparks of tolerance are easily snuffed out. Transforming Islam into a truly benign faith will require a miracle of re-interpretation. And a few intrepid reformers, such as Maajid Nawaz, are doing their best to accomplish it.

Many believe it unwise to discuss the link between Islam and the intolerance and violence we see in the Muslim world, fearing that it will increase the perception that the West is at war with the faith and cause millions of otherwise peaceful Muslims to rally to the jihadist cause. I admit that this concern isn’t obviously crazy—but it merely attests to the seriousness of the underlying problem. Religion produces a perverse solidarity that we must find some way to undercut. It causes in-group loyalty and out-group hostility, even when members of one’s own group are behaving like psychopaths.

But it remains taboo in most societies to criticize a person’s religious beliefs. Even atheists tend to observe this taboo, and enforce it on others, because they believe that religion is necessary for many people. After all, life is difficult—and faith is a balm. Most people imagine that Iron Age philosophy represents the only available vessel for their spiritual hopes and existential concerns. This is an enduring problem for the forces of reason, because the most transformative experiences people have—bliss, devotion, self-transcendence—are currently anchored to the worst parts of culture and to ways of thinking that merely amplify superstition, self-deception, and conflict.

Among all the harms caused by religion at this point in history, this is perhaps the most subtle:  Even when it appears beneficial—inspiring people to gather in beautiful buildings to contemplate the mystery existence and their ethical commitments to one another—religion conveys the message that there is no intellectually defensible and nonsectarian way to do this. But there is. We can build strong communities and enjoy deeply moral and spiritual lives, without believing any divisive nonsense about the divine origin of specific books.

And it is this misguided respect for revelation that explains why, in response to the starkest conceivable expression of religious fanaticism, President Obama has responded with euphemisms—and missiles. This may be the best we can hope for, given the state of our discourse about religion. Perhaps one day we will do “everything that we can to protect our people and the timeless values that we stand for.” But today, we won’t even honestly describe the motivations of our enemies. And in the act of lying to ourselves, we continue to pay lip service to the very delusions that empower them.