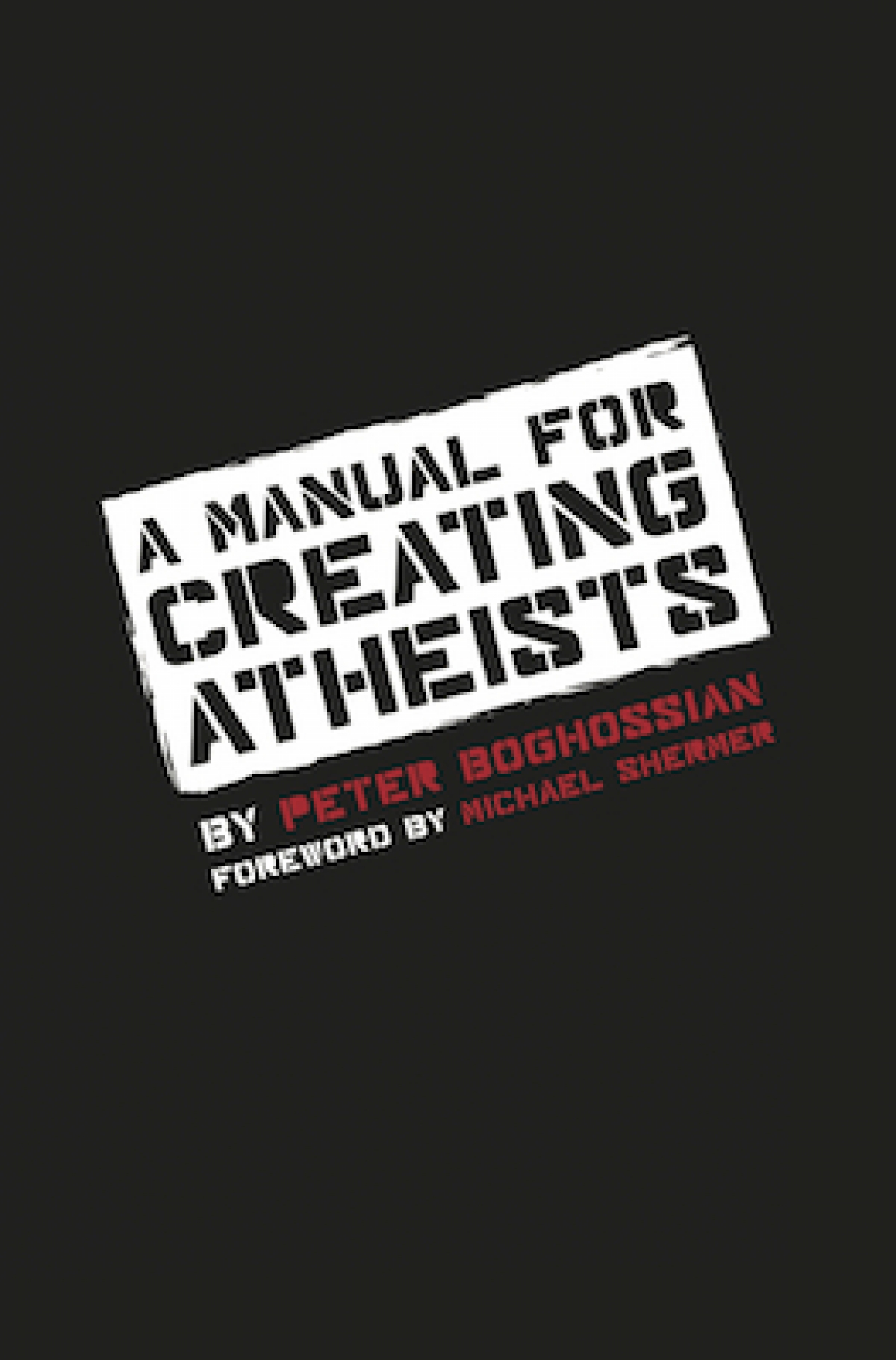 Peter Boghossian is a full-time faculty member in the philosophy department at Portland State University. He is also a national speaker for the Center for Inquiry, the Secular Student Alliance, and the Richard Dawkins Foundation for Reason and Science.

Peter was kind enough to answer a few questions about his new book, A Manual for Creating Atheists.

1. What was your goal in writing A Manual for Creating Atheists?

My primary goal was to give readers the tools to talk people out of faith and into reason.

2. How do you help readers accomplish this?

Almost everyone can relate to having had conversations with friends, family, coworkers, where you are left shaking your head and wondering how in the world they can believe what they believe—conversations where they fully and uniformly dismiss every fact and piece of evidence presented to them. So the core piece of advice I give may at first sound counterintuitive, but it is simple: When speaking with people who hold beliefs based on faith, don’t get into a debate about facts or evidence or even their specific beliefs. Rather, get them to question the manner in which they’ve reached their beliefs—that is, get them to question the value of faith in appraising the world. Once they question the value of faith, all the unevidenced and unreasoned beliefs will inevitably collapse on their own. In that sense, the book is really about getting people to think critically—the atheism part is just a by-product.  So my hope is that people won’t just read A Manual for Creating Atheists—they’ll act on it and put it to use. It’s a tool, and like any tool, it does no good unless it’s used.

The book draws from multiple domains of study—philosophy, psychology, cognitive neuroscience, psychotherapy, history, apologetics, even criminal justice and addiction medicine—and focuses principally on research designed to change the behavior of people who don’t think they have a problem and don’t want their behavior changed. This vast body of peer-reviewed literature forms the basis of the book, but the book also stems in large part from my own decades-long work using and teaching these techniques in prisons, colleges, seminaries, and hospitals, and even on the streets, where I’ve honed and revised them, improved upon what’s worked, and discarded what hasn’t. The result is a book that will get the reader quickly up to speed—through step-by-step guides and conversational templates—on all the academically grounded, street-tested techniques and tools required for talking people out of faith and superstition and into reason.

3. What is the most common logical error religious people make in their arguments for the existence of God?

Confirmation bias—although I think it’s less that they’re using a logical fallacy and more that the entire way they’ve conceptualized the problem is fallacious. In other words, they’ve started with their conclusion and reasoned backward from that conclusion. They’ve started with the idea not only that God exists but that a very specific God exists—and they’ve asked themselves how they know this is true. They’ve put their metaphysics before their epistemology.

4. Perhaps you should spell out what you mean by “epistemology” and why you think it’s important.

“Epistemology” basically means how one knows what one knows. In the context of a faith-based intervention, one can also look at epistemology as a belief-forming mechanism.

A key principle in helping people abandon faith and embrace reason is to focus on how one acquires knowledge. As I said, interventions should not target conclusions that someone holds, or specific beliefs, but the processes used to form beliefs. God, for example, is a conclusion arrived at as the result of a faulty epistemology.

For too long we’ve misidentified the problem. We’ve conceptualized it in terms of conclusions people hold, not mechanisms of belief formation they use. I’m advocating that we reconceptualize the problem of faith, God, and religion (and virtually every other instance of insufficiently evidenced belief) in terms of epistemology—that is, in terms of how people come to know what they think they know.

5. What do you consider to be the core commitments of a healthy epistemology?

1) An understanding that the way to improve the human condition is through reason, rationality, and science. Consequently, the words “reason” and “hope” would be forever wedded, as would the words “faith” and “despair.”
2) The willingness to revise one’s beliefs.
3) Saying “I don’t know” when one doesn’t know.

6. Do you think that the forces of reason are winning?

Up to now, most atheists have simply criticized religion in various ways, but the point is to dispel it.  In A Manual For Creating Atheists, Peter Boghossian fills that gap, telling the reader how to become a ‘street epistemologist’ with the skills to attack religion at its weakest point: its reliance on faith rather than evidence. This book is essential for nonbelievers who want to do more than just carp about religion, but want to weaken its odious grasp on the world.

—Jerry Coyne, author of Why Evolution is True

Dr. Peter Boghossian’s A Manual for Creating Atheists is a precise, passionate, compassionate and brilliantly reasoned work that will illuminate any and all minds capable of openness and curiosity. This is not a bedtime story to help you fall asleep, but a wakeup call that has the best chance of bringing your rational mind back to life.

—Stefan Molyneux, host of Freedomain Radio, the largest and most popular philosophy show on the web

A book so great you can skip it and just read the footnotes. Pure genius.