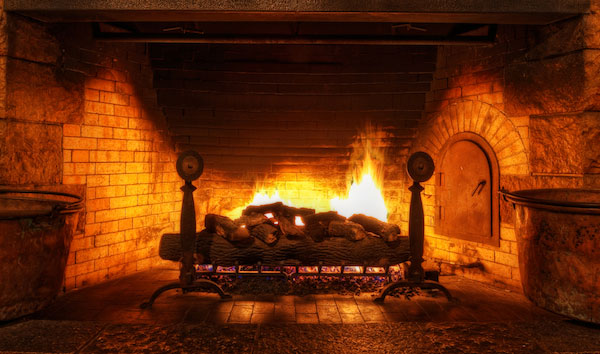 It seems to me that many nonbelievers have forgotten—or never knew—what it is like to suffer an unhappy collision with scientific rationality. We are open to good evidence and sound argument as a matter of principle, and are generally willing to follow wherever they may lead. Certain of us have made careers out of bemoaning the failure of religious people to adopt this same attitude.

However, I recently stumbled upon an example of secular intransigence that may give readers a sense of how religious people feel when their beliefs are criticized. It’s not a perfect analogy, as you will see, but the rigorous research I’ve conducted at dinner parties suggests that it is worth thinking about. We can call the phenomenon “the fireplace delusion.”

On a cold night, most people consider a well-tended fire to be one of the more wholesome pleasures that humanity has produced. A fire, burning safely within the confines of a fireplace or a woodstove, is a visible and tangible source of comfort to us. We love everything about it: the warmth, the beauty of its flames, and—unless one is allergic to smoke—the smell that it imparts to the surrounding air.

I am sorry to say that if you feel this way about a wood fire, you are not only wrong but dangerously misguided. I mean to seriously convince you of this—so you can consider it in part a public service announcement—but please keep in mind that I am drawing an analogy. I want you to be sensitive to how you feel, and to notice the resistance you begin to muster as you consider what I have to say.

Because wood is among the most natural substances on earth, and its use as a fuel is universal, most people imagine that burning wood must be a perfectly benign thing to do. Breathing winter air scented by wood smoke seems utterly unlike puffing on a cigarette or inhaling the exhaust from a passing truck. But this is an illusion.

Here is what we know from a scientific point of view: There is no amount of wood smoke that is good to breathe. It is at least as bad for you as cigarette smoke, and probably much worse. (One study found it to be 30 times more potent a carcinogen.) The smoke from an ordinary wood fire contains hundreds of compounds known to be carcinogenic, mutagenic, teratogenic, and irritating to the respiratory system. Most of the particles generated by burning wood are smaller than one micron—a size believed to be most damaging to our lungs. In fact, these particles are so fine that they can evade our mucociliary defenses and travel directly into the bloodstream, posing a risk to the heart. Particles this size also resist gravitational settling, remaining airborne for weeks at a time.

Once they have exited your chimney, the toxic gases (e.g. benzene) and particles that make up smoke freely pass back into your home and into the homes of others. (Research shows that nearly 70 percent of chimney smoke reenters nearby buildings.) Children who live in homes with active fireplaces or woodstoves, or in areas where wood burning is common, suffer a higher incidence of asthma, cough, bronchitis, nocturnal awakening, and compromised lung function. Among adults, wood burning is associated with more-frequent emergency room visits and hospital admissions for respiratory illness, along with increased mortality from heart attacks. The inhalation of wood smoke, even at relatively low levels, alters pulmonary immune function, leading to a greater susceptibility to colds, flus, and other respiratory infections. All these effects are borne disproportionately by children and the elderly.

The unhappy truth about burning wood has been scientifically established to a moral certainty: That nice, cozy fire in your fireplace is bad for you. It is bad for your children. It is bad for your neighbors and their children. Burning wood is also completely unnecessary, because in the developed world we invariably have better and cleaner alternatives for heating our homes. If you are burning wood in the United States, Europe, Australia, or any other developed nation, you are most likely doing so recreationally—and the persistence of this habit is a major source of air pollution in cities throughout the world. In fact, wood smoke often contributes more harmful particulates to urban air than any other source.

In the developing world, the burning of solid fuel in the home is a genuine scourge, second only to poor sanitation as an environmental health risk. In 2000, the World Health Organization estimated that it caused nearly 2 million premature deaths each year—considerably more than were caused by traffic accidents.

I suspect that many of you have already begun to marshal counterarguments of a sort that will be familiar to anyone who has debated the validity and usefulness of religion. Here is one: Human beings have warmed themselves around fires for tens of thousands of years, and this practice was instrumental in our survival as a species. Without fire there would be no material culture. Nothing is more natural to us than burning wood to stay warm.

True enough. But many other things are just as natural—such as dying at the ripe old age of thirty. Dying in childbirth is eminently natural, as is premature death from scores of diseases that are now preventable. Getting eaten by a lion or a bear is also your birthright—or would be, but for the protective artifice of civilization—and becoming a meal for a larger carnivore would connect you to the deep history of our species as surely as the pleasures of the hearth ever could. For nearly two centuries the divide between what is natural—and all the needless misery that entails—and what is good has been growing. Breathing the fumes issuing from your neighbor’s chimney, or from your own, now falls on the wrong side of that divide.

The case against burning wood is every bit as clear as the case against smoking cigarettes. Indeed, it is even clearer, because when you light a fire, you needlessly poison the air that everyone around you for miles must breathe. Even if you reject every intrusion of the “nanny state,” you should agree that the recreational burning of wood is unethical and should be illegal, especially in urban areas. By lighting a fire, you are creating pollution that you cannot dispose. It might be the clearest day of the year, but burn a sufficient quantity of wood and the air in the vicinity of your home will resemble a bad day in Beijing. Your neighbors should not have to pay the cost of this archaic behavior of yours. And there is no way they can transfer this cost to you in a way that would preserve their interests. Therefore, even libertarians should be willing to pass a law prohibiting the recreational burning of wood in favor of cleaner alternatives (like gas).

I have discovered that when I make this case, even to highly intelligent and health-conscious men and women, a psychological truth quickly becomes as visible as a pair of clenched fists: They do not want to believe any of it. Most people I meet want to live in a world in which wood smoke is harmless. Indeed, they seem committed to living in such a world, regardless of the facts. To try to convince them that burning wood is harmful—and has always been so—is somehow offensive. The ritual of burning wood is simply too comforting and too familiar to be reconsidered, its consolation so ancient and ubiquitous that it has to be benign. The alternative—burning gas over fake logs—seems a sacrilege.

And yet, the reality of our situation is scientifically unambiguous: If you care about your family’s health and that of your neighbors, the sight of a glowing hearth should be about as comforting as the sight of a diesel engine idling in your living room. It is time to break the spell and burn gas—or burn nothing at all.

Of course, if you are anything like my friends, you will refuse to believe this. And that should give you some sense of what we are up against whenever we confront religion.