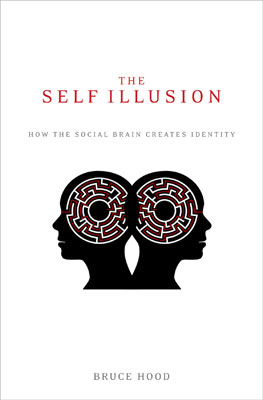 Bruce Hood is currently the Director of the Bristol Cognitive Development Centre at the University of Bristol. He has been a research fellow at Cambridge University and University College London, a visiting scientist at MIT, and a faculty professor at Harvard. He has been awarded an Alfred Sloan Fellowship in neuroscience, the Young Investigator Award from the International Society of Infancy Researchers, the Robert Fantz Memorial Award and voted a Fellow by the Association for Psychological Science. He is the author of several books, including SuperSense: Why We Believe the Unbelievable. This year he was selected as the 2011 Royal Institution Christmas Lecturer—to give three lectures broadcast by the BBC—the most prestigious appointment for the public engagement of science in the UK. Bruce was kind enough to answer a few questions about his new book,The Self Illusion: How the Social Brain Creates Identity.

In what sense is the self an illusion?

For me, an illusion is a subjective experience that is not what it seems. Illusions are experiences in the mind, but they are not out there in nature. Rather, they are events generated by the brain. Most of us have an experience of a self. I certainly have one, and I do not doubt that others do as well – an autonomous individual with a coherent identity and sense of free will. But that experience is an illusion – it does not exist independently of the person having the experience, and it is certainly not what it seems. That’s not to say that the illusion is pointless. Experiencing a self illusion may have tangible functional benefits in the way we think and act, but that does not mean that it exists as an entity.

If the self is not what it seems, then what is it?

For most of us, the sense of our self is as an integrated individual inhabiting a body. I think it is helpful to distinguish between the two ways of thinking about the self that William James talked about. There is conscious awareness of the present moment that he called the “I,” but there is also a self that reflects upon who we are in terms of our history, our current activities and our future plans. James called this aspect of the self, “me” which most of us would recognize as our personal identity—who we think we are. However, I think that both the “I” and the “me” are actually ever-changing narratives generated by our brain to provide a coherent framework to organize the output of all the factors that contribute to our thoughts and behaviors.

I think it helps to compare the experience of self to subjective contours – illusions such as the Kanizsa pattern where you see an invisible shape that is really defined entirely by the surrounding context. People understand that it is a trick of the mind but what they may not appreciate is that the brain is actually generating the neural activation as if the illusory shape was really there. In other words, the brain is hallucinating the experience. There are now many studies revealing that illusions generate brain activity as if they existed. They are not real but the brain treats them as if they were.

Now that line of reasoning could be applied to all perception except that not all perception is an illusion. There are real shapes out there in the world and other physical regularities that generate reliable states in the minds of others. The reason that the status of reality cannot be applied to the self, is that it does not exist independently of my brain alone that is having the experience. It may appear to have a consistency of regularity and stability that makes it seem real, but those properties alone do not make it so.

Similar ideas about the self can be found in Buddhism and the writings of Hume and Spinoza. The difference is that there is now good psychological and physiological evidence to support these ideas that I cover in the book in a way that I hope is accessible for the general reader.

Many readers might wonder where these narratives come from, and who interprets them, if not a self?

I do not think there are many cognitive scientists who would doubt that the experience of I is constructed from a multitude of unconscious mechanisms and processes. Me is similarly constructed, though we may be more aware of the events that have shaped it over our lifetime. But neither is cast in stone and both are open to all manner of reinterpretation. As artists, illusionists, movie makers, and more recently experimental psychologists have repeatedly shown, conscious experience is highly manipulatable and context dependent. Our memories are also largely abstracted reinterpretations of events – we all hold distorted memories of past experiences.

In the book, I emphasize the developmental processes that shape our brains from infancy onwards to create our identities as well as the systematic biases that distort the content of our identity to form a consistent narrative. I believe much of that distortion and bias is socially relevant in terms of how we would like to be seen by others. We all think we would act and behave in a certain way, but the reality is that we are often mistaken.

Answering the question of who is experiencing the illusion or interpreting the story is much more problematic. This is partly a conceptual problem and partly a problem of dualism. It is almost impossible to discuss the self without a referent in the same way that is difficult to think about a play without any players. Second, as the philosopher Gilbert Ryle pointed out, in searching for the self, one cannot simultaneously be the hunter and the hunted, and I think that is a dualistic problem if we think we can objectively examine our own minds independently, because our mind and self are both generated by the brain. So while the self illusion suggests an illogical tautology, I think this is only a superficial problem.

What role do you think childhood plays in shaping the self?

Just about everything we value in life has something to do with other people. Much of that influence occurs early in our development, which is one reason why human childhoods are so prolonged in comparison to other species. We invest so much effort and time into our children to pass on as much knowledge and experience as possible. It is worth noting that other species that have long periods of rearing also tend to be more social and intelligent in terms of flexible, adaptive behaviors. Babies are born social from the start but they develop their sense of self throughout childhood as they move to become independent adults that eventually reproduce. I would contend that the self continues to develop throughout a lifetime, especially as our roles change to accommodate others.

You talk about the role of social networking in the way we portray our self. Do you believe this technology is going to have a significant effect on us?

Honestly, I don’t know, and I spend a whole chapter speculating on this. We are increasingly spending more time on social networking sites, and I believe this will continue to become an integral part of the way we interact. These are still early days, and it is not clear how these new technologies are going to shape the social landscape, but we now have the capability to interact and be influenced by others in ways never before imagined.

There are some interesting phenomena emerging. There is evidence of homophily – the grouping together of individuals who share a common perspective, which is not too surprising. More interesting is evidence of polarization. Rather than opening up and exposing us to different perspectives, social networking on the Internet can foster more radicalization as we seek out others who share our positions. The more others validate our opinions, the more extreme we become. I don’t think we need to be fearful, and I am less concerned than the prophets of doom who predict the downfall of human civilization, but I believe it is true that the way we create the narrative of the self is changing.

If the self is an illusion, what is your position on free will?”

Free will is certainly a major component of the self illusion, but it is not synonymous. Both are illusions, but the self illusion extends beyond the issues of choice and culpability to other realms of human experience. From what I understand, I think you and I share the same basic position about the logical impossibility of free will. I also think that compatibilism (that determinism and free will can co-exist) is incoherent. We certainly have more choices today to do things that are not in accord with our biology, and it may be true that we should talk about free will in a meaningful way, as Dennett has argued, but that seems irrelevant to the central problem of positing an entity that can make choices independently of the multitude of factors that control a decision. To me, the problem of free will is a logical impasse – we cannot choose the factors that ultimately influence what we do and think. That does not mean that we throw away the social, moral, and legal rulebooks, but we need to be vigilant about the way our attitudes about individuals will be challenged as we come to understand the factors (both material and psychological) that control our behaviors when it comes to attributing praise and blame. I believe this is somewhat akin to your position.

Many people may find your conclusion about the self somewhat depressing. What benefit, if any, can a reader expect to gain from your book?

That was the same reaction I got from most publishers when we sent the book proposal out for consideration. I think they failed to appreciate that the self illusion explains so many aspects of human behavior as well as our attitudes toward others. When we judge others, we consider them responsible for their actions. But was Mary Bale, the bank worker from Coventry who was caught on video dropping a cat into a garbage can, being true to her self? Or was Mel Gibson’s drunken anti-Semitic rant being himself or under the influence of someone else? What motivated Congressman Weiner to text naked pictures of himself to women he did not know? In the book, I consider some of the extremes of human behavior from mass murderers with brain tumors that may have made them kill, to rising politicians who self-destruct. By rejecting the notion of a core self and considering how we are a multitude of competing urges and impulses, I think it is easier to understand why we suddenly go off the rails. It explains why we act, often unconsciously, in a way that is inconsistent with our self image – or the image of our self as we believe others see us.

That said, the self illusion is probably an inescapable experience we need for interacting with others and the world, and indeed we cannot readily abandon or ignore its influence, but we should be skeptical that each of us is the coherent, integrated entity we assume we are.