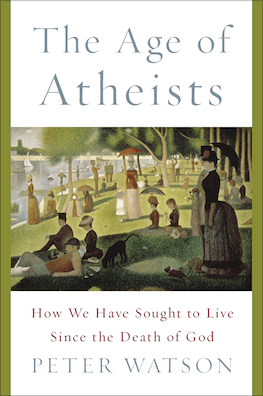 Peter Watson is an intellectual historian, journalist, and the author of thirteen books, including The German Genius, The Medici Conspiracy, and The Great Divide. He has written for The Sunday Times, The New York Times, the Observer, and the Spectator. He lives in London.

He was kind enough to answer a few question about his new book The Age of Atheists: How We Have Sought to Live Since the Death of God.

1. You begin your account of atheism with the 19th-century German philosopher, Friedrich Nietzsche. Why is he a good starting point?

In 1882 Nietzsche declared, roundly, in strikingly clear language, that “God is dead”, adding that we had killed him. And this was a mere twenty years after Darwin’s Origin of Species, which is rightly understood as the greatest blow to Christianity. But Nietzsche’s work deserves recognition as a near-second. Darwinism was assimilated more quickly in Germany than in Britain, because the idea of evolution was especially prevalent there. Darwin remarks in one of his letters that his ideas had gone down better in Germany than anywhere else. And the history of Kulturkampf in Germany – the battle between Protestantism and Catholicism – meant that religion was under attack anyway, by its own adherents.  Other people responded to Nietzsche more than to anyone else – Ibsen, for example, W. B. Yeats, Robert Graves, James Joyce. In Germany there was the phenomenon of the Nietzschean generations – young people who lived his philosophy in specially-created communities. And people responded to Nietzsche because, his writing style was so pithy, to the point, memorable, and crystal clear. It is Nietzsche who tells us plainly, eloquently, that there is nothing external to, or higher than, life itself, no “beyond” or “above”, no transcendence and nothing metaphysical. This was dangerous thinking at the time, and has remained threatening for many people.

2. You say at one point in your book that psychology, or perhaps therapy, has taken over from religion as a way to understand our predicament, and – to an extent – deal with it. Do you follow Freud in viewing religion as, essentially, a product of neurosis?

I do think there is sound anthropological evidence that the first “priests”, the shamans of Siberia, were probably psychological misfits or malcontents, and that throughout history we have gone on from there, because many well known religious figures – some of the Hebrew prophets, John the Baptist, St. Paul, St. Augustine, Joan of Arc, Luther – were psychologically odd. Religion is not so much neurosis as psychological adjustment to our predicament – that’s the key, religion is to be understood psychologically, not theologically. It was George Carey, when he was archbishop of Canterbury, not me, who said “Jesus the Saviour is becoming Jesus the Counselor”. (This was in the 1990s.) And it was a well known Boston rabbi, Joshua Loth Liebman, who, soon after the end of World War Two, wrote a best-selling book that admitted that traditional religion had been too harsh on ordinary believers and that the churches and the synagogues and the mosques had a great deal to learn from what he called the new depth psychology – he meant Freudianism. So the church invited the psychologists to put their tanks on its lawn, so to speak. And psychotherapy hasn’t looked back. More people go into therapy now as a search for meaning than for treatment for mental illness.

3. What do you conclude from this?

That worship, the religious impulse, is best understood as a sociological phenomenon, rather than a theological one. In your own books you point up some of the absurdities of religion, but the two I regard as most revealing are the worship of a Royal Enfield motor-bicycle in a region of India, a bike involved in a crash in which its driver was killed but now is reckoned to have supernatural powers. And second, the Internet site, godchecker.com, which lists – apparently without irony – more than 3,000 “supreme beings.” I wonder how many fact-checkers they have. (That last sentence is written in a new type-face I have invented, called Ironics.)

In the recent world-wide survey of religion and economics by Pippa Norris and Ronald Inglehart, they show convincingly that religion is expanding in those areas of the world where ‘existential insecurity’ – poverty, natural disasters, disease, inadequate water supplies, HIV/AIDS, the lack of decent health care – is endemic and growing, whereas in the more prosperous and secure West, including now the USA, atheism is inexorably on the rise. Religion is prevalent among the poor and in decline in the more prosperous parts of the world. It is less that religion is on the rise as poverty is.

4. In your book you survey the views of a great number of people. How would you describe your own atheism?

We are gifted with language and Nietzsche had a gift for language. I follow people like the German poet Rilke and the American philosopher Richard Rorty who say that our way to find meaning in life is to use language to “name” the world, to describe new aspects of it that haven’t been described before, and in so doing enlarge the world we inhabit, enlarge it for everyone. This links science and the arts, in particular poetry. When new sciences are invented they bring with them new language, and scientific discoveries – continental drift, say, dendrochronology, the Higgs boson – that enlarge our understanding precisely through incorporating new language. But so does the best art, the best poetry, the best theatre.  This is therefore an exercise for the informed – increasingly the very well informed, as the more mature sciences are now more or less inaccessible to the layman. Language enables us to be both precise about the world, and to generalize. As a result we know that life is made up of lots and lots of beautiful little phenomena, and that large abstractions, however beautiful in their own way, are not enough. There is no one secret to life, other than that there is no one secret to life. If you must have a transcendent idea then make it a search for “the good” or “the beautiful” or “the useful”, always realizing that your answers will be personal, finite and never final. The Anglo-American philosopher Alasdair MacIntyre said “The good life is the life spent seeking the good life.” That implies effort. We can have no satisfaction, no meaning, without effort.