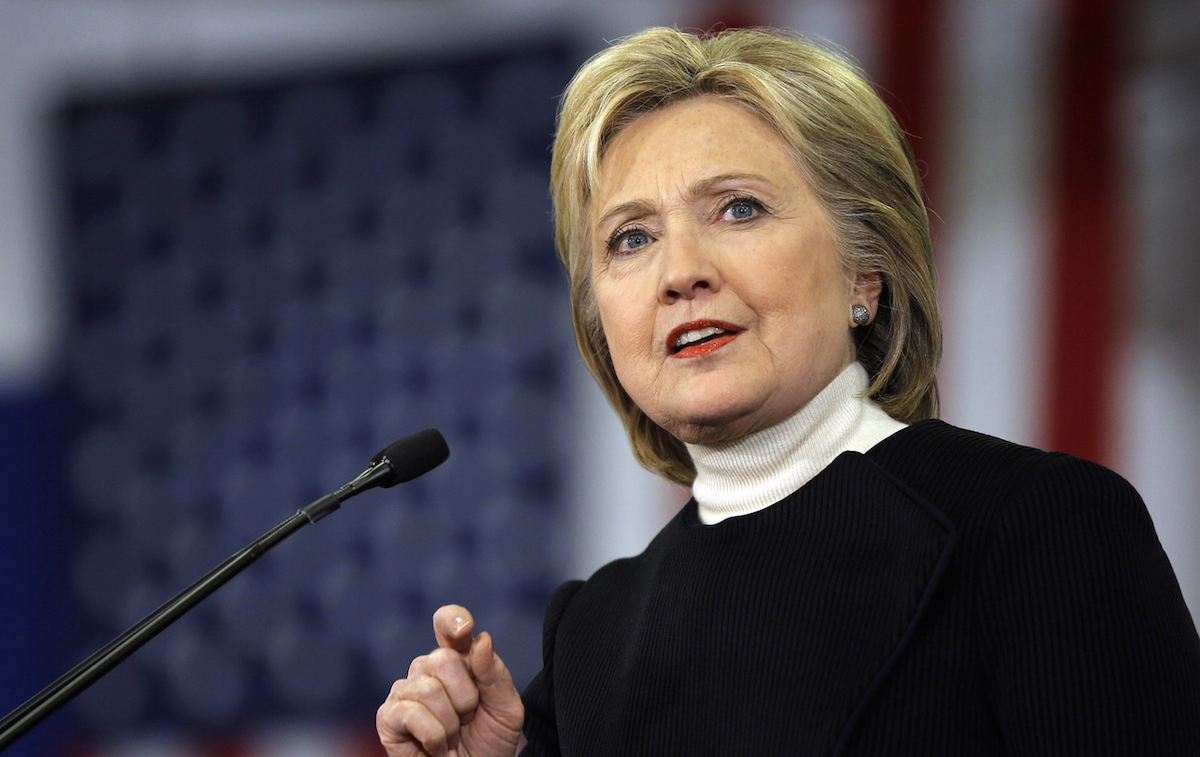 The following is part of a speech that I think Hillary Clinton should deliver between now and November. Its purpose is to prevent a swing toward Trump by voters who find Clinton’s political correctness on the topic of Islam and jihadism a cause for concern, especially in the aftermath of any future terrorist attacks in the U.S. or Europe.—SH

Today, I want to talk about one of the most important and divisive issues of our time—the link between the religion of Islam and terrorism. I want you to know how I view it and how I will think about it as President. I also want you to understand the difference between how I approach this topic and how my opponent in this presidential race does.

The underlying issue—and really the most important issue of this or any time—is human cooperation. What prevents it, and what makes it possible? In November, you will be electing a president, not an emperor of the world. The job of the president of the United States, even with all the power at her or his disposal, is to get people, both at home and abroad, to cooperate to solve a wide range of complex problems. Your job is to pick the person who seems most capable of doing that.

In the past, I’ve said that groups like ISIS and al-Qaeda have nothing to do with Islam. And President Obama has said the same. This way of speaking has been guided by the belief that if we said anything that could be spun as confirming the narrative of groups like ISIS—suggesting that the West is hostile to the religion of Islam, if only to its most radical strands—we would drive more Muslims into the arms of the jihadists and the theocrats, preventing the very cooperation we need to win a war of ideas against radical Islam. I now see this situation differently. I now believe that we have been selling most Muslims short. And I think we are all paying an unacceptable price for not speaking clearly about the link between specific religious ideas and the sectarian hatred that is dividing the Muslim world.

All of us, Muslim and non-Muslim alike, must oppose the specific ideas within the Islamic tradition that inspire groups like ISIS and the so-called “lone-wolf” attacks we’ve now seen in dozens of countries, as well as the social attitudes that are at odds with our fundamental values—values like human rights, and women’s rights, and gay rights, and freedom of speech. These values are non-negotiable.

But I want to be very clear about something: Bigotry against Muslims, or any other group of people, is unacceptable. It is contrary to the values that have made our society a beacon of freedom and tolerance for the rest of the world. It is also totally counterproductive from a security point of view. However, talking about the consequences of ideas is not bigotry. Muslims are people—and most of the world’s 1.6 billion Muslims simply want to live in peace like the rest of us. Islam, however, is a set of ideas. And all ideas are fit to be discussed and criticized in the 21st century.

Every religious community must interpret its scripture and adjust its traditions to conform to the modern world. Western Christians used to murder people they believed were witches. They did this for centuries. It’s hard to exaggerate the depths of moral and intellectual confusion this history represents. But it is also true that we have largely outgrown such confusion in the West. The texts themselves haven’t changed. The Bible still suggests that witchcraft is real. It isn’t. And we now know that a belief in witches was the product of ancient ignorance and fear. Criticizing a belief in witchcraft, and noticing its connection to specific atrocities—atrocities that are still committed by certain groups of Christians in Africa—isn’t a form of bigotry against Christians. It’s the only basis for moral and political progress.

One thing is undeniable: Islam today is in desperate need of reform. We live in a world where little girls are shot in the head or have acid thrown in their faces for the crime of learning to read. We live in a world where a mere rumor that a book has been defaced can start riots in a dozen countries. We live in a world in which people reliably get murdered over cartoons, and blog posts, and beauty pageants—even the mere naming of a teddy bear. I’m now convinced that we have to talk about this with less hesitancy and more candor than we’ve shown in the past. Muslims everywhere who love freedom must honestly grapple with the challenges that a politicized strand of their religion poses to free societies. And we must support them in doing so. Otherwise, our silence will only further empower bigots and xenophobes. That is dangerous. We are already seeing the rise of the far right in Europe. And we are witnessing the coalescence of everything that’s still wrong with America in the candidacy of Donald Trump.

Now, it is true that this politicized strain of Islam is a source of much of the world’s chaos and intolerance at this moment. But it is also true that no one suffers more from this chaos and intolerance than Muslims themselves. Most victims of terrorism are Muslim; the women who are forced to wear burkhas or are murdered in so-called “honor killings” are Muslim; the men who are thrown from rooftops for being born gay are Muslim. Most of the people the world over who can’t even dream of speaking or writing freely are Muslim. And modern, reform-minded Muslims, most of all, want to uproot the causes of this needless misery and conflict.

I want to say a few words on the topics of immigration and the resettlement of refugees: The idea of keeping all Muslims out of the United States, which my opponent has been proposing for months, is both impractical and unwise. It’s one of those simple ideas—like building a wall and deporting 11 million undocumented workers—that doesn’t survive even a moment’s scrutiny. More important, if you think about this purely from the point of view of American security, you realize that we want Muslims in our society who are committed to our values. Muslims like Captain Humayun Khan, who died protecting his fellow American soldiers from a suicide bomber in Iraq. Or his father, Khizr Khan, who spoke so eloquently in defense of American values at the Democratic National Convention. Muslims who share our values are, and always will be, the best defense against Islamists and jihadists who do not.

That’s one reason why the United States is faring so much better than Europe is. We have done a much better job of integrating our Muslim community and honoring its religious life. Muslims in America are disproportionately productive and prosperous members of our society. They love this country—with good reason. Very few of them have any sympathy for the ideology of our enemies. We want secular, enlightened, liberal Muslims in America. They are as much a part of the fabric of this society as anyone else. And given the challenges we now face, they are an indispensable part.

Despite the counsel of fear you hear from my opponent, security isn’t our only concern. We also have an obligation to maintain our way of life and our core values, even in the face of threats. One of our values is to help people in need. And few people on earth are in greater need at this moment than those who are fleeing the cauldron of violence in Iraq and Syria—where, through no fault of their own, they have had to watch their societies be destroyed by sectarian hatred. Women and girls by the tens of thousands have been raped, in a systematic campaign of sexual violence and slavery. Parents have seen their children crucified. The suffering of these people is unimaginable, and we should help them—whether they are Yazidi, or Christian, or Muslim. But here is my pledge to you: No one will be brought into this country without proper screening. No one will be brought in who seems unlikely to embrace the values of freedom and tolerance that we hold dear.  Is any screening process perfect? Of course not. But I can tell you that the only way to actually win the war on terror will be to empower the people who most need our help in the Muslim world.

The irony is that my opponent in this race, who imagines that he is talking tough about terrorism and ISIS and Islam, has done nothing but voice inflammatory and incoherent ideas that, if uttered by a U.S. president, would immediately make the world a more dangerous place. Being “politically incorrect” isn’t the same as being right, or informed, or even sane. It isn’t a substitute for actually caring about other people or about the consequences of one’s actions in the world. It isn’t a policy. And it isn’t a strategy for winning the war against jihadism, or a war of ideas against radical Islam…